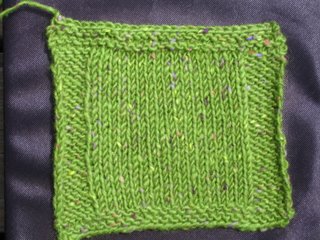 Since I'm heading out on a 10-day backpacking trip Saturday (more on that later), I figured I'd better have a knitting project to take with that is more substantial than just a beanie. Something with some meat to it. And since I haven't knit a sweater in a couple of years (whaa???), I was thinking that might be an idea. So I'm gonna try my hand at cabling for the first time, with this, the Central Park Hoodie from the new KnitScene from Interweave Press: 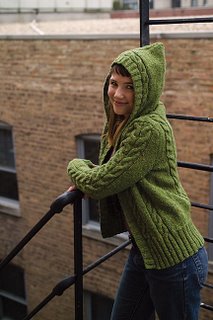 Just happened to have some lime-y green tweed wool in the right gauge, so the final product should look pretty close to the pic above. My only complaint is with the pattern: seriously, why do cable charts so byzantine??? This pattern sports not 1, not 2, but three cable charts that the poor hapless knitter has to alternate between. Why not just put it in one damn chart?, huh?

And now for something completely different. Check out my friend's wife's pregger belly. Great shot. Apparently he made the mistake of using tags that implied the shot was pron, 'cause now I guess it's been viewed like 10,000 times. But its really art. Go here: You just won the lottery: belly