Happy Groundhog Day, all! In Gobbler's Knob, PA (no kidding), Punxsutawney Phil says "spring is on it's way!" But, I think that's just in the east and south, where all the prognosticating groundhogs reside. While New York, Ohio, Georgia, North Carolina, Alabama, and two Canadian Provinces each have one, until this year the Left Coast hasn't. But this year, Oroville, CA introduces sunglasses-sporting "Oroville Phil". No word yet as to what he saw. 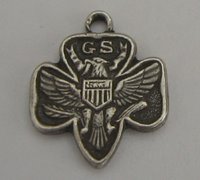 Writing this part of the post is kind of depressing though, and proves the old saw "You can't go home again." While researching it to find links, I learned that Camp White's Landing is no longer a Girl Scout camp; it is now a privately-owned for-profit youth camp called The Catalina Experience. The historic lodge at Camp Cloud Rim, built in 1937 by the WPA and the site of more than one of my adventures there, burned down in 1992. Apparently, 'Girl Scout' is no longer cool enough for older girls (not that it was cool when I was doing it, but still); girls age 11-17 no longer go by the moniker Senior Girl Scouts, but by the silly, generic, and confusing STUDIO 2-B. Feh. I must be getting old. At least I didn't find out that I could have purchased my charm in The Shop for less. 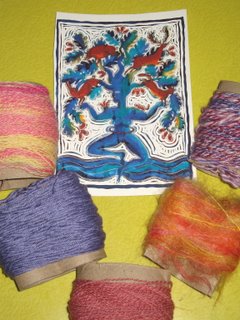 But Tom brought other goodies as well, ones fraught with much less angst. Rose sent me the Pilates mags she'd promised (thanks, Yarnivore!) And there was a bounteous box of yarns from Rachel, shown here. You may remember her as Village Knittiot, one of the other Freeform Knitting 365 participants. There are 3 mini-skeins of her handspun in there: 2 blue-faced Leicester (top left, bottom) and a tencel (top right), all 2-plys and *much* more delicate and consistent than anything I've ever made. What patience! There is also a bit of Rowan cotton (the periwinkle) and an unlabeled commercial mohair (the Tequila sunrise). Oh, *and* that great card with the earth mama on it! I am spoiled. AND some purple merino roving she picked up at Rhinebeck!! Thanks, Rachel! Can't wait to work them into my Freeform project.

Off to my crochet class. Ta!