It's Friday, and that means Purl 'n Hurl updates. Check out the blog for all the deets. Suffice it to say, we came, we purled, we hurled. Wheeee! While there, between cocktail #3 and #4 I brought up the idea of attending the 2006 California Wool and Fiber Festival, just around the corner from us in Booneville, Anderson Valley. It's coming up fast, Sep. 15-17, and I'm trying to rally the troops for a trip down for some camping, some fiber, and some beer (oh, yeah, did I mention there's a great brewery there??). Lots of vendors, including Merry Meadows Farm in Willits; I have lots of their eBay fiber. Anyone want to join me?? 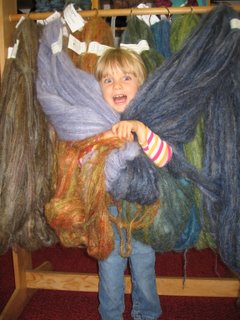 Isn't this the cutest future fiber-addict you've ever seen? My favorite princess in the world, Sophie, and her mom Eileen and I were at Boll Weaver in Eureka, CA on Wednesday, and I snapped this pic of the lil' imp immersing herself in the fibery-goodness that is handspun. Does she have good taste, or what?!? Her mom is the one that taught me to knit, and she and I co-founded our local SnB, Purl 'n Hurl, so it's definitely in her veins.

Started a new hat last night, for something easy to tote to PnH. I've been promising my friend Boomer a beanie for like a year now, and he's finally going to get one. I've already made 2 with his name on them, but neither seemed quite 'him.' Third time's a charm. He wanted greens and blues, with extra room to accomodate his congenital head-bump in the back. I spun this stuff up in June, and it's perfect, nice and soft. Hope he likes it as much as I love this mini-basket he made me in trade. 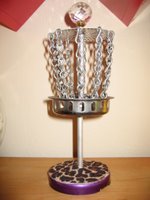 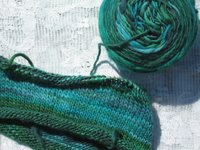 Being the 1st of the month, lots of knitalongs are getting started, including some I'm participating in. Today is the "official" start date of the Central Park Hoodie I started in July. Go, knitters, go! And Sexy Knitters Club chose not 1 but 2 projects for their KAL this time around, and today the gun goes off on both, the Simple Knitted Bodice and Sizzle. I'm doing both of them (because I'm a greedy, ambitious gal), as I'm already in the SKB KAL. Still have to order the yarn for both, as well as the Sizzle pattern. Also starting today is the new Knit the Classics book, The Time Traveller's Wife, which I've heard rave reviews about. Means I better get crackin' on my project for the last book, Lolita; prizer deadline is on Monday, I think. Finally, Secret Pal 9 gets rolling today, but the only thing I needed to do for that (get an anonymous email account) is checked off my freakishly long T0-Do list. (Gawd, I'm such a joiner!)

There's the noon whistle (geez, I've been working on this post for a looooong time! all those groups must be what's slowing Blogger down). Gotta run, I'm working on spinning up some sock yarn.