Pop the Corn, There's a Knittin' Movie Comin' to Town! 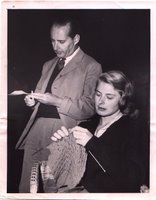 I've had this post about celebrity knitting on the back-burner for awhile now, but after I saw the headline "Julia Roberts to Star in Movie About Knitting" I decided it's time has come. The film, The Friday Night Knitting Club, is based on an upcoming Kate Jacobs novel of the same name and features Roberts as a single mom-cum-knitshop-owner. Seems the knitting star is also slated to co-produce the film. But hold your horses, it won't be out 'til '08. So what are we to do 'til then?

Not to fear; now that knitting celebs are as common as Robert Downey Jr. arrests, everyone's getting in on the action. Seems that everywhere I look, it's Hilary Swank knits this, and Sarah Jessica Parker knitting that. Steven Tyler's daughter's doing it, as is Uma and Madonna. (I looked and looked and couldn't find a photo of Julia knitting, hence Ingrid here. She's cooler anyway. But I did find this: Roberts knit a turtleneck sweater published in McCalls in 2001 - the pattern is available at LearnToKnit, and a kit is available at Worldknit.

But now here's a celebrity sighting I'm interested in: I want to get my hands on a copy of Tracy Ullman's new book, Knit2Together. She teamed up with Mel Clark of Wildfiber fame; this upscale Santa Monica, CA. yarnstore donates a quarter to charity every time a customer refuses a plastic shopping bag. I read that Tracy is worried they'll confiscate her WIP at the airport. And I just love that her daugher Mabel (what a wonderful name! Very Velma) knits and sells cashmere "nose warmers," which mum characterizes as "like SARS masks"; I'm thinking ala Knitty nosewarmers. Tracey's NPR interview is here, and there's a great video of her appearance on the Today Show here, wherein she tells Matt Lauer she wants to knit him a blue toupee (careful, it's at the Huffington Post, so watch out for hate-commenters and other nonesense). Can't wait to get your hands on a copy? Here's a preview from the book: Mohair Apron pattern, courtesy of NPR. (Every knitter worth their sticks needs one of those, right?)