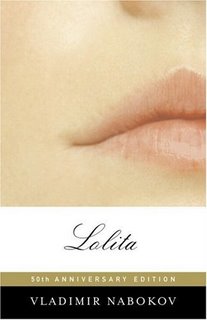 Today's the day: Knit the Classics starts their August book, Lolita by Vladimir Nabokov, and now that I'm in, I'm rarin' to go.

I started reading Lolita once before, but abandoned it before its time. I forsee success in this attempt, as I now have company. One of The Modern Library's list of 100 Best Novels (#4 on the Board's list, #34 on the readers' list), Lolita is one for the ages.

One of my "things" is language, and one of the appealing aspects about Lolita is the sheer delight the author obviously takes in wordcraft. Nabokov is known for wordplay, and what amazes me is that he did it with ease in both his native Russian and the English he later adopted; no easy feat.

After diving in this morning, my initial response is that I'd better dust off my dictionary, because my vocabulary is going to get a workout. Words added to my personal lexicon now include:

Solecism, cognomen, etiolated, apotheosis, tendresse (Fr), expiatory. (And these are just from the foreward!)

What I'm wondering is, Does this edition contain the "Dr. John Ray, Jr. PhD" foreward that the Vintage edition I'm reading has? I understand that the more recent edition supplants this pseudonymous foreward by Nabokov with an introductory piece by Martin Amis, although to what purpose I don't know.

Now, off to read!